Unfortunately the twitter UI does not provide a built in method for providing text alternatives using the standard HTML methods for doing so. You cannot add an alt attribute to images and/or provide a caption using the figure and figcaption elements.
What you can do pretty easily is provide the alt text as text in the same tweet as the image (if it fits) or if it is a tweet from someone else or there is not enough space to provide in the same tweet you can reply to the tweet with an alt text.

Philosoraptor wonders: Does HTML4 have the ‘right to be forgotten’? pic.twitter.com/pvbYqyBWe8 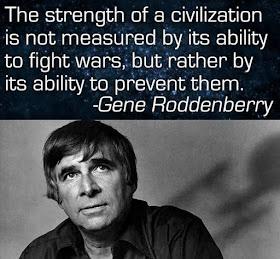 Note: You can often find the text version of quotes and other text embedded in graphics by sticking the first few words of the text in Google, (the Gene Roddenberry quote for example) you can then simply provide a link to the text source for everyone \0/.

Providing text alternative for images on twitter is a bit more work, but it makes the interesting stuff available to anybody that follows you on twitter. (same goes for Facebook)

Sometimes, I find graphics whose alt text simply don’t fit into 140 characters or would benefit from structured HTML markup, if I think its really interesting and I have the time, I will make it available using a service such as codepen and then publish the link on twitter:

Note: The Easy Chirp twitter client also provides a method to provide text alternatives amongst many other accessibility features.

Posted a few music video’s on twitter, for example:

PIL – This is not a love song [lyrics] https://t.co/PypgSGqTsz

Thinking that using Gist is a simple way to to add lyrics to songs.

Steve is the Technical Director at TPG. He joined The Paciello Group in 2006 and was previously a Senior Web Accessibility Consultant at vision australia. He is the creator and lead developer of the Web Accessibility Toolbar accessibility testing tool. Steve is a member of several groups, including the W3C Web Platforms Working Group and the W3C ARIA Working Group. He is an editor of several specifications at the W3C including HTML 5.1, ARIA in HTML, Notes on Using ARIA in HTML and HTML5: Techniques for providing useful text alternatives. He also develops and maintains HTML5accessibility.